Jinan (22) from JKT48 in Jakarta, made a guest appearance on the NHK radio program “Miyake Tamio no My Asa! “. She appeared in the “World Eye” segment of the program also, another show about asking about their life as an overseas idol.

Through an interpreter, she explained that there are currently 31 members and 8 research students, that this year is the 10th year of the group’s formation, and that they are working under a new concept called “NEW ERA”.

“We are going to hold our 10th anniversary concert, regional concerts, and for the first time, we are going to make the setlist for the theater. We’re also going to write original songs for the 10th anniversary.” As mentioned above, she gave a detailed introduction to the group’s current situation.

–How do you want to convey the idol culture that started in Japan by way of JKT?

“JKT48 has been around for 10 years, but I think there are still very few people who understand the concept of Japanese idols. I would like to continue to introduce Japanese idol culture, such as having dreams and working hard to achieve them”.

–What is popular among young people of your generation in Indonesia?

“TikTok is very popular among young people. The music and dances that become popular from it are spreading and becoming a trend among the youth. I do it too. I like to laugh at the videos.”

–Jinan, is there anything from Japan that you like?

“I like Japanese music, but I love the best are sushi, ramen, and takoyaki! I also like Harajuku fashion clothes with lots of colors, so I often look at them on the internet”.

–Indonesian takoyaki have octopus in them? (laughs)

–What is something unique about Indonesia that you would like to introduce to Japanese people?

“There are many different cultures. For example, there are traditional houses and clothes. From the song “Kmimwa Melody,” I would like to introduce batik clothes. I would like to tell people in Japan that this dress can also be used as an idol costume”.

–When I saw the music video, the dress looked like a good mix of Japan and Indonesia. I thought you wanted to do something that would bring the two countries together, but how do you want JKT48 to connect with Japan in the future?

“I hope that our two countries will continue to have a good relationship, and I hope that we can participate more and more in activities to connect that friendship”.

At the end of the show, JKT48 version of “Dararashinai Aishikata (Cara Ceroboh untuk Mencinta )”, a song is originally sung by AKB48, played as an ending tune. 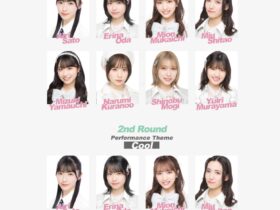